The marine activities field represents excellence and interdisciplinary cooperation, supported by the consolidation of nationally-recognised teams and their international partnerships.

Most of these teams are part of a school within UBO, the IUEM (Institut Universitaire Européen de la Mer). The IUEM is an interdisciplinary centre with the objectives of spreading knowledge of the marine world, studying and observing its interactions with the atmosphere and continental areas, training researchers and staff in these fields, and contributing to the observation of both natural and human-instigated changes to these environments.

IUEM became an Observatory for the Sciences of the Universe (OSU) in 2005, under the authority of UBO, CNRS, and IRD. One laboratory at the Université de Bretagne Sud is also part of IUEM. The network is complemented by a mechanics laboratory linking UBO, ENSTA Bretagne, and ENI Brest. Ifremer works in partnership with four of the six mixed research units at IUEM.

Our fields of study include both coastal and offshore areas:

Offshore research examines life in the extreme environments of the ocean depths, the creation and evolution of the Earth's crust in undersea zones, as well as ocean circulation and its relationship with climate.

In the marine sciences field, UBO has developed a specific approach to training and instruction that is unique in France: Marine and Coastal Sciences (SML).

Both Master's and PhD courses are run in these fields. PhD-level courses are carried out at the Ecole Doctorale des Sciences de la Mer.

IUEM's geographical location, neighbouring other research organisations active in marine sciences, has allowed the creation of collaborative technical structures and platforms, such as Bibliothèque La Pérouse (the marine documentation centre shared between UBO, Ifremer, and IRD), the Ocean Spectrometry Centre (PSO), and the High-Performance Computing Centre for the Ocean (PCIM).

To address the increasing challenges facing ocean and coastal ecosystems, the “Interdisciplinary graduate School for the blue planet” (ISblue) was created to train the next generation of ocean innovators and science leaders and place them at the forefront of research to answer the needs of the growing blue economy through top level research-based training.
ISblue gathers most of the forces in marine science and technology in West and South Brittany, belonging to the universities (UBO, UBS), research national organisms (CNRS, Ifremer, IRD), engineering schools (IMT-Atlantique, ENSTA Bretagne, ENIB) and the French naval academy.

UBO also heads a consortium of 13 French universities working in the marine sector, and serves alongside CNRS and Ifremer on the European Marine Board. 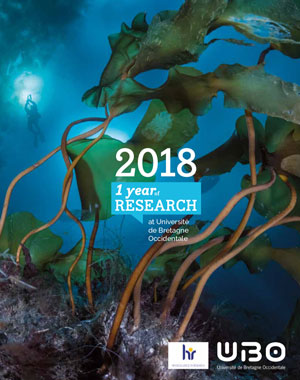