DIGITENS closing conference: Sociabilities on the Move in the Long Eighteenth Century (1650-1850) 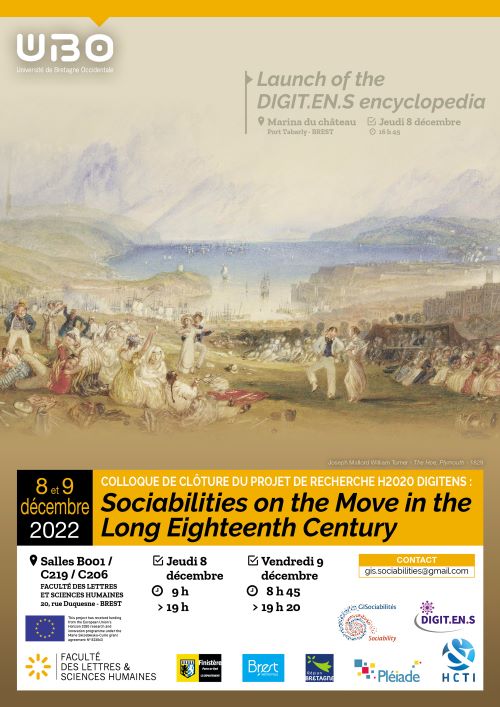 This keynote paper re-evaluates the role of sociability as one of fundamental importance to the Grand Tour agenda. The act and process of socialising with fellow Grand Tourists, older compatriots abroad and foreign societies was, in turns, a formative experience, an international debut, and a tool for expanding and affirming networks of influence. Crucially, sociability offered an important means of providing witness to the diverse performances and assertions of masculine identity that young elite men were expected to undertake
Grand Tour sociability took place in motion. Shifting across a diverse range of locations that spanned the courts, saloons and ballrooms of Paris and Vienna, the hunting runs of Savoy, the battlefield of Bavaria and the glaciers of Switzerland, this offered both opportunities and challenges. Under pressure to make a successful debut and keenly scrutinized by peers and elders, Grand Tourists sought to navigate the dual expectations placed upon them by the shifting dictates of sociability and masculinity, at times in contexts that hazarded more than their reputations.

Sarah Goldsmith is a Chancellor’s Fellow at the University of Edinburgh. Prior to this, she undertook her PhD at the University of York, and held a Leverhulme Early Career Fellowship at the University of Leicester. She has several publications on the eighteenth-century Grand Tour, including her first monograph, Masculinity and Danger on the Eighteenth-Century Grand Tour (University of London Press, 2020). Her current research explores interdisciplinary approaches to the history of the eighteenth, nineteenth and early twentieth-century male bodies. She is a AHRC/BBC 2018 New Generation Thinker and a historical consultant for the V&A’s 2022 'Fashioning Masculinities: The Art of Menswear' exhibition.

Tim Hitchcock is Professor Emeritus of Digital History at the University of Sussex. He has published widely on the histories of gender, sexuality and poverty focussed primarily on eighteenth-century London. With Professor Robert Shoemaker and others he has also created a series of websites helping to give direct public access to 37 billion words of primary sources evidencing the history of Britain. Designed to underpin the writing of a new 'history from below', these sites include: The Old Bailey Online, 1674 to 1913; London Lives, 1690-1800; Locating London's Past; Connected Histories; and The Digital Panopticon: The Global Impact of London Punishments, 1780-1925. He has also been instrumental in developing new approaches to and tools for the analysis of historical data. Hitchcock's first degree was from the University of California at Berkeley (1980) and his DPhil from the University of Oxford (1985). He served as co-director of the Sussex Humanities Lab from 2014, and director from 2019 to 2021.

Paul Stock is Associate Professor of Early Modern History 1500-1850 at the London School of Economics and Political Science, a Fellow of the Royal Historical Society, and a Fellow of the Royal Geographical Society. His publications include Europe and the British Geographical Imagination, 1760-1830 (2019), The Uses of Space in Early Modern History (editor, 2015), and The Shelley-Byron Circle and the Idea of Europe (2010).

Call for papers:
For the past ten years, the research work carried out by the international network formalized into the GIS Sociabilités/Sociability in 2017 has opened new paths in sociability studies by adopting an interdisciplinary and comparative approach. Building on the traditional historiography of social historians such as Maurice Agulhon, Norbert Elias, Daniel Roche or Peter Clark, our research has first focused on the emergence, evolution and resistance of British forms of sociability interpreted in national and transnational contexts, before shedding light on the importance of mutual exchanges, influences and tensions in the (re)definition of models of sociability in the long eighteenth century. Part of this research output is now available online on the DIGIT.EN.S website (www.digitens.org), a digital encyclopedia platform to be enriched in the coming months with new entries.
The dynamics of circulations in European and colonial societies have revealed the centrality of movement as a concept to grasp the ever-changing nature and function of sociability. Movement is a dynamic concept and process expressed and materialised through a variety of terms and actions: evolution, transformation, circulation, change, transport, mobility, transfer, exchange…
The commercial and colonial expansion as well as the Enlightenment debates on man and society contributed to a significant shift in both practices and discourses, fostering a far more dynamic conception of the social and sociable man. Moreover, the emergence of new sciences such as chemistry and anthropology in the second half of the eighteenth century set matter and bodies in motion, affected by an interplay of flux, powers and forces. The anxiety generated by this rising interest in phenomena of production, degeneration, transience and liminality paradoxically strengthened discourses promoting moral values of refinement and improvement, as well as a reflexive understanding of sociality.
Against a Western logic of space as abstract, stable, ordered and homogeneous, the concept of “movement” can offer a novel framework for the interpretation and analysis of sociabilities on the move. As underscored by Tim Ingold, “lives […] are never exclusively here or there, lived in this place or that, but always on the way from one place to another” (Kirby 32). Movement is at the core of the individual’s social life, providing opportunities of mobility or transgression, and as such is inevitably bound up with issues of control, hierarchy and exclusion. Movement stimulates by defying political and social strictures: de-familiarizing the gaze, shifting perspectives, creating fresh connections, making boundaries more permeable, enabling new prospects. It is the primal sign of life as well as the engine of social interaction, therefore key to research on sociabilities.

3. Mobility, migration and contact
* Contractual mobility
- The growth of commerce and trading companies as engines of sociability
- Sociability and the rise of world diplomacy
- Maritime travel and the expansion of global communication and exchange
- Scientific expeditions, opening new horizons for socialization and promoting the advance of human knowledge
- Sociability engendered or disrupted by troop/military movements
* Migrations
- Sociability induced by voluntary migration: colonisation of new territories, exploration, transatlantic movement
- The redefinition or reconfiguration of sociability when the individual or the group is forced to leave one’s country: exile, revolution, slavery.
* Contact zones
- The role played by contact zones in the evolution of sociability
- The influence of cultural differences on forms and representations of sociability
- The reactions to settlement experiences and how they reshape norms and practices of sociability. Analysing the processes at work: conflict, rejection, adaptation, appropriation…

Following the conference, a selection of papers will be published.